A couple of stepwells visited, including Adalaj near Ahmedabad, India, and we thought what could be more beautiful than that. How can Rani-Ki-Vav be any more impressive to be on the tentative list of the UNESCO World Heritage Site? As we drove to Patan to visit Rani-Ki-Vav with the scorching sun upon us, we had our apprehensions. Doubts gained more ground as we crossed the well-manicured lawns of the site. The green grass tempted  us to stop and enjoy the beauty of the lawns under the shades of the trees. But we trudged on to where people seemed to be gathering. As we approached and laid our eyes on the structure, we missed our heartbeats to the breath-taking beauty of what lay in front of us. It was almost magical and we seemed to have arrived to witness historical architecture at its best. The magnificence of this structure left us spellbound.

Pillars which supported the Upper Levels 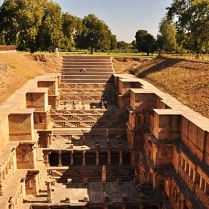 Well side View of Rani-ki-Vav

The Kutch region is dotted with these stepwells mostly built in the 11th and 12th century. Built as places for social gatherings and rest areas for the weary travellers, these step wells also had religious and spiritual significance as water was highly regarded by the people. It was also a place for cultural mingling and ‘melas’. 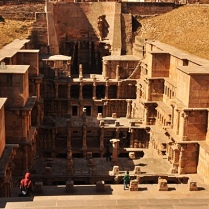 Remnants of the Upper Levels 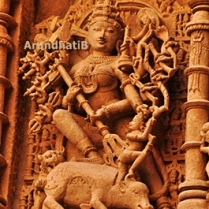 A step well is different from a regular well in that it is usually covered with well-ventilated terraces and pavilions. Rani-ki-vav is no different. This step well was built by Rani Udayamati in memory of her husband King Bhimdev I of the Solanki dynasty who ruled from Patan, then the capital of Gujarat. It was commissioned in 1063. The vav or well was silted under the floods of the River Saraswati and it was discovered only in the 1960s again. Around the late 1980s it was excavated by the Archaeological Survey of India and most of its intricate carvings have been found in perfect conditions. 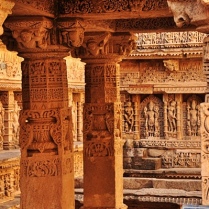 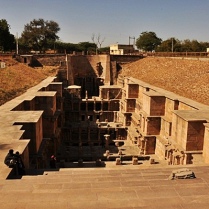 Rani-ki-vav originally consisted of 7 stories and they were built with 4 compartmental multi-storeyed pillared pavilions. Of these only 5 stories have been preserved and unearthed by the Archaeological Survey. The vav measures about 64m long, 20m wide and 27m deep.  The walls, corridors and pillars all depict imposing and elegant sculptures. Of the original 800 only 400 sculptures have survived which is enough to depict the opulence in architecture of the Solanki Dynasty. The 10 incarnations of Vishnu called ‘Dasavataras’ is the central theme of these carvings. A brilliant carving of Sheshashayi-Vishnu, in which Vishnu reclines on the thousand-hooded serpent Shesha, is sure to make your jaws drop. Numerous apsaras, sadhus, gods and goddess all made of stone speaks highly of the Solanki artisans.  There is also a 30kms long tunnel which opens to a small gateway below the last step. This tunnel connects to the nearby town of Siddhpur and was used by the King as an escape route. Today this tunnel is blocked by fallen stones.

The architecture and carvings of Rani-ki-Vav themselves are a testimony to the finest historical specimens. It indeed deserves to be on the tentative list of the World Heritage Sites. As a document from the past, it speaks volumes of the grandeur of the Solanki Architecture. Rani-ki-vav is the Queen among the stepwells in Gujarat.

3 Responses to A Queen among Stepwells—Rani-ki-Vav